Originally published by the New Statesman 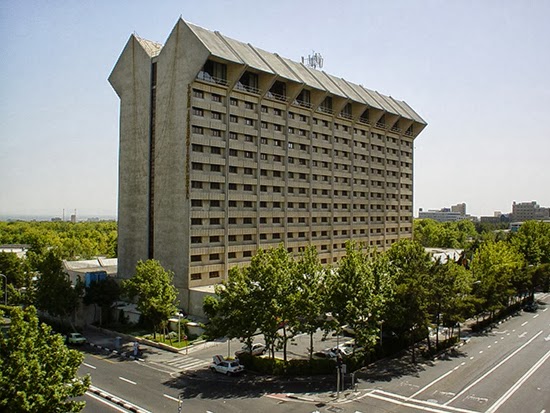 I walk along Fatemi Avenue in Tehran amid the swirling dust of a gathering electrical storm, the tulip-shaped towers of the Hotel Laleh swimming in a heat haze over honking afternoon traffic. I muster a smile for the doormen in peaked caps and gold lanyard and stroll purposefully into the foyer, freezing after a few steps and looking around me. For ten days this visit has loomed over my annual trip to the Iranian capital like the black flower of the hotel itself; now that I’m here, I haven’t the faintest idea what I’m doing.

The glamorous trappings of the lobby haven’t changed in seven years: an enormous art deco chandelier still forms an inverted pyramid of light over tables and chairs, the former dressed with red and white flowers, the latter upholstered with mock Gucci embroidery and occupied by a mix of bemused tourists and bored looking businessmen. There’s an unmanned grand piano, a bronze statue of Hafez’s tomb, a marble reception hung with mandatory portraits of the ayatollahs, eyes narrowed as though scanning the lobby for licentious behaviour.

I spot a receptionist studying me with interest, and in a split second convince myself that this is the same man who checked Marie in the night she arrived in 2005; who cracked a joke about Rupert Murdoch when she mentioned the Sunday Times, and who managed not to stare at her eye patch the way I had when I’d met her at the taxi rank ten minutes earlier. Suddenly self conscious, I turn and walk into the lobby, sit and order a pot of tea, aware only after the waiter has departed that I’m seated at our old table; that opposite me – to paraphrase a popular Iranian saying – Marie’s place is empty.

I’d been in Tehran for three months when Marie Colvin arrived to cover the presidential elections for the Sunday Times. I’d somehow wrangled work as home news editor of a national English-language newspaper despite my abysmal Farsi, a job that entailed rewriting largely unintelligible newswires on earthquakes and plane crashes (so many earthquakes and plane crashes), and righteous affirmations of Iran’s nuclear program. They were exciting and unsettling days: exciting because I was finally doing what everyone back home would see as ‘real journalism’ after years of travel writing and reviewing; unsettling because I felt like a fraud, and not just because of my second-rate Farsi.

I’d realised on arrival that I didn’t have the character of a news journalist; that I lacked the cynical swagger and the deadline in the blood. I wrote the occasional whimsical piece for publications back home – a story on underground poetry clubs for the New Statesman, another on coffee shop youth culture for the BBC – but when I pitched similar human interest efforts to the Sunday Times (a paper whose foreign editor had called me at Heathrow to express his happiness at having someone ‘on the ground’), they were turned down, and I was encouraged instead to put together something on the forthcoming elections. I didn’t have a mobile, so the foreign desk kept calling my grandmother’s house, where I was staying, only to have her bark insensibly down the phone until either party hung up or I realised what was happening and jumped on the line.

Still, as the first round approached I managed to write something on the elections – a few hundred words towing the widely accepted wisdom that former president and remade liberal Akbar Hashemi Rafsanjani would sweep to victory (he had recently appeared on a Time magazine cover with the headline ‘Iran’s Next President’). I wrote it under the pseudonym Ali Bandari, something I told the Sunday Times would ensure against a conflict of interests with my own paper, though it was actually because I’d been refused a journalist’s visa, and could be arrested if my name was discovered in foreign publications.

Rafsanjani found himself vying for the second round against Tehran’s mayor, a hardliner called Mahmoud Ahmadinejad whose rare appearances in the international press had been as a caricature spouting semi-comical quotes about cutting off hands and strangling democracy. The story acquired an extra page and the Sunday Times sent in the cavalry – hence my meeting Marie Colvin at the Hotel Laleh that June evening, attempting to sound fluent as I bantered with her taxi driver and ordered a pot of tea at what would become our regular table.

She asked my opinion on what might happen at the ballots; I swallowed my pride over the first story (‘Rafsanjani’s seemingly full-blooded independence looks set to propel him to victory,’ says Ali Bandari), and told her what people were now saying in the office: that Ahmadinejad had a real chance of winning. That while Rafsanjani had been measuring his head for the crown and receiving the international media at his palatial Tehran offices, Ahmadinejad had been touring the provinces in a beat up orange bus, speaking in mosques and emphasising to the common people that it wasn’t just their right to vote, it was their Islamic duty. It had also become clear that he was Ayatollah Khamenei’s choice for president; beyond that, little else seemed to matter.

We had three days before Marie needed to file the story, days I spent almost entirely in the office, sometimes empty save for the caretaker’s son who careered around the floor in a plastic pedal car, crashing into desks and upturning chairs. I blackened my fingers flipping through back issues of the paper in enormous bound folders, filled notebooks with background on the candidates – details of Rafsanjani’s two terms as president between 1989 and 1997, of Ahmadinejad’s possible role in the American hostage crisis of 1979. When I did leave the office, it was to visit disparate parts of the capital and conduct interviews with potential voters – from wizened merchants hunched over sacks of dates and dried limes in the downtown bazaar, to Gucci-draped Persian princesses drifting around uptown shopping malls, headscarves serving as little more than hammocks for their dyed and dreadlocked hair.

At the end of each day I’d hop in a battered cab to the Hotel Laleh, euphoric and exhausted, arms laden with bundles of printed and photocopied paper, feet wincing with blisters. Marie and I would face each other over our usual table, a pot of tea between us, and I’d fill the gaps in her story, providing political context and local colour that her schedule of rigorously enforced press conferences left her unable to pursue. Once done with business we’d settle into our chairs and exchange war stories – hers filled with snipers and hostages, mine with ski resorts and secluded city bars. If she found my situation comical then she didn’t let on; she seemed impressed by my diligence, and implied that I might have a promising career at the Sunday Times, news she dropped into the conversation without realising that it caused the entire lobby to begin tilting beneath my feet.

That Friday morning I took my Iranian passport to the Tajrish mosque and purpled my finger with a vote for Rafsanjani. The results began filtering in the following afternoon, a day I spent glued to my computer, newswires piling up beside me as I refreshed the online vote count and watched Ahmadinejad snake closer to victory. Every hour I called the Laleh to update Marie, her smoke-stained phone voice instilling in my mind a timeless picture of the journalist’s hotel room: curtains closed, ashtrays overflowing, papers strewn over an unmade bed.

By the time I arrived at the hotel that evening Ahmadinejad’s victory had been announced, Marie’s story filed and her taxi to the airport booked. We drank a celebratory pot of tea, the piano occupied for the first and only time by a young man fiddling Persian flourishes into schmaltzy 1980s ballads. Afterwards she walked me to reception, shook my hand and gave me her card, scribbling her personal email on the back and encouraging me to drop her a line when I got back to London. “If you get back to London,” she said, winking to imply that she knew only too well how hard it would be to tear myself away.

I decided to walk back to my grandmother’s house that night. The streets were quiet after days ringing with protests and street parties and the names of candidates screamed from passing cars. The city seemed to have admitted defeat, to have folded in on itself to regard this latest development from a fearful distance. Yet I found myself smiling as I walked, swinging my steps in time to a piano ballad and greedily dismantling a bar of chocolate given to me in parting by Marie – a woman who had helped me find in three days what had previously eluded me for three months. Who had stopped me from feeling like a fraud.

Behind me, the dusk sky was scattered with bats, and the funereal towers of the Hotel Laleh receded for the last time, or so I thought.
Posted by Cyrus Shahrad at 08:25