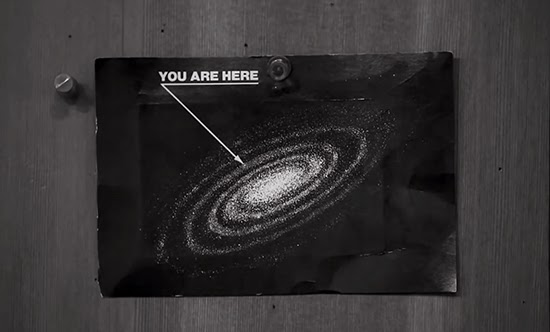 Dream I have written a potentially world-changing piece of music, and am desperate to carry it back to the land of the living. Wake to find the notes still in my head. After one round, realise it is the tune to ‘How Deep Is Your Love’.

Finish shaving. Constellations of tiny black hairs decorate the sink like a negative print of our galaxy. Reminded of a documentary on dark matter – the 70% of stuff in the universe invisible until recently due to its failure to reflect light, and tessellating previously disparate galaxies into an unthinkably complex whole. Try to dispel the unhelpful image of galaxies as remains of an enormous pre-cosmic beard.

Wait for a bus on Brixton Hill in biblical rain; my brown leather shoes, three days out of the box, are already tiger striped with water stains. Find myself watching a large puddle on the road, the report of rain on which seems to be tapping out a code; after a while, it becomes hard not to see a pattern emerging, as if the code were an SOS or warning on loop. Every passing car tyre shatters the surface of the puddle into a shimmering squall, tiny waves colliding until calm is restored and the rain begins tapping out its message once more.

Top floor of the 159, windows so steamed that the Thames looks like something from a Turner painting. All over the glass are fingerprints and handprints, signatures and abstract sketches, some looking days old. In black marker pen, on the grey plastic beside my seat, someone has scrawled the words: ‘Death is when you sleep sleep.’ I wonder how often, if ever, the writer stumbles across his work, and if the coincidence makes him feel momentarily as though existence is more than just a random assortment of sensory experiences.

At the studio find myself reluctant to work. Make tea, tidy up, spend an hour pitching for an article on the actor Harry Dean Stanton, whose documentary portrait – Partly Fiction – Spencer and I saw at the Curzon last night. Mention in the email that as a boy I was so obsessed with HDS that for two years I insisted my schoolmates call me Cyrus Dean Shahrad (none did). Wonder if they’ll think I’m making this up, and what kind of idiot they’ll consider me either way.

Spend another hour reading about the movie online. Most reviewers mention HDS in the back of his limo talking about how the fact that the earth orbits the sun at 17,000 miles per hour makes him nervous (“there’s nothing I can do about it”), or the drive back from the bar when he gazes out at the smog smothered Hollywood light show, noting that nothing matters because the earth will soon be gone (“and that’s not a negative concept… it’s liberating”).

Head out to buy an energy bar from Whole Foods, largely an excuse to cheer myself up by wandering past the Tofurkey products in the vegan aisle. Resist the urge to begin another text exchange with Spencer of song titles altered to incorporate the word ‘Tofurkey’ (‘Play Tofurkey Music White Boy’, ‘The Wrong N*gga Tofurk With’). Always seem to get the same girl at the checkout counter; always she looks at my lone protein bar and the twenty pence pieces I count out to pay for it with a mixture of pity and disgust.

Manage to achieve a negligible amount of something resembling work in the afternoon. At 5pm leave the studio and meet Daniela for coffee in Foyles. Brief discussion about whether her cappuccino is topped with a fern leaf or a feather, after which we spend a while deciding who has the worst tattoo among the various art students secretly sketching customers, unsubtle glances at their subjects revealing faces distorted with the seriousness of their endeavour. At some point find myself explaining my theory on the part of the self that in moments of crisis – a plane going down, a car flipping over – steps out from the shadow of the ego and makes time stand still, allows for clarity of thought previously cluttered by the accumulated detritus of consciousness; how I believe this accounts for the various stories of angels taking people’s hands and leading them to safety in moments of near death or disaster. Notice as I talk that Daniela is giggling and looking over my shoulder – at a waiter, it transpires, whose low slung trousers are revealing a sizeable builder’s crack as he gathers up cups. By the time we leave the fern/feather on her cappuccino is gone, replaced by foamy dregs that remind me of the froth that fringed the shores of Camber Sands when we played there as kids.

Harry Dean Stanton has a picture of the Milky Way on his wall; on it is an arrow disappearing into the nebulous starlight of one spiral arm with the legend: ‘You Are Here’.

Farsi class from 6-8pm, after which I walk through Leicester Square in the pouring rain for no reason. Pause outside the Pizza Hut on Cambridge Circus, where my brother and I once ate as children following a surprise trip to Les Misérables with our father, who had always been too busy at the hospital for nights out. Remember the excitement of racing to get changed after school, the flustered drive for the train; recall there being spots of blood on the collar of Dad’s shirt from surgery, and how quickly he fell asleep once the show began. Twelve years of living in London, and still the best memory of the city I have is of the three of us sitting at this window eating pizza after 10pm, looking out on to a rain soaked night like this one.

After a while I walk on to Trafalgar Square, my new leather shoes now ruined, and catch the 159 home. It’s not until the bus is passing over Westminster Bridge that I turn and see the words scrawled on the plastic beside me: ‘Death is when you sleep sleep.’
Posted by Cyrus Shahrad at 08:18