Windows On The World 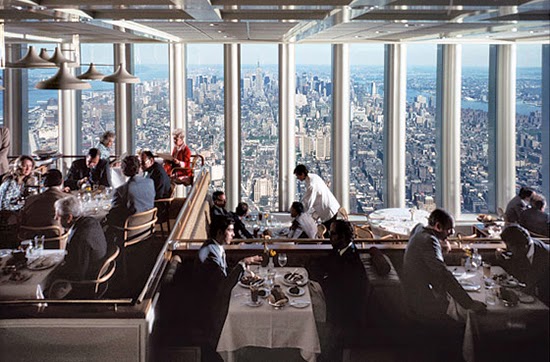 Sometimes during the chaos of prepping tables for breakfast I’ll get five minutes of peace, and I’ll walk over to the windows and look down over the city. On a certain kind of spring morning, when the rising sun paints the South Tower with a certain kind of pale fire, I find myself transported back to my first shift. I’d never been up in a plane, never even been to the top of the Empire State Building, and it was a struggle not to drift off and spend that first day staring out at the view, trying to spot our house on the far side of the river, pressing my face against the glass in an attempt to look directly down and pick out landmarks from our former neighbourhood.

I quickly realised the latter was in vain – even if physics hadn’t stopped me from peering down the side of the tower, nothing remained of the streets on which my brother Asim and I were raised by our Dad. He’d owned an electrical goods store in a district that was all electrics bar the pawn and liquor places – Radio Row, they called it – and we’d lived in a dark but spacious flat above the shop. I remember the day the Port Authority guys came around to talk to Dad about the towers, about the offer they were going to make him to pack up and move – it seemed generous at the time, though looking back it was probably loose change to them. Still, Dad was doing chemo at that point, and Asim was locked up for his first armed robbery, and with me struggling to look after the shop on my own Dad saw it as an answer to his five daily prayers. He didn’t care that Radio Row was going to be levelled. Looking back, I’m not sure I cared either.

Between the payoff and Dad’s savings we were able to buy a house in Jersey with views east over the river, and to pay for a live in carer for Dad, who we set up in a first floor bedroom by a window overlooking the old neighbourhood. Dad only left the house over the next four years to go back to hospital once in a while and hear that the cancer had either retreated or returned; he slept a lot, and when he wasn’t sleeping he sat in his armchair staring out the window at the towers going up. It was an obsession for him: he joked that he wanted to live long enough to see them finished, which in the end he didn’t – he passed away the summer before they topped out.

I quit my job at the bakery and spent the following months alone in the house, sitting for the most part in Dad’s old chair and watching the final pieces of the towers being lifted into place. A lot of things were going through my head, not many of which I can remember now, but there were definitely times when I wondered if I was losing my mind, and I knew that people from the old neighbourhood were starting to worry about me. One day a friend who worked in construction called and said that they were weeks away from opening a smart new restaurant on top of the North Tower, and that he could get me an interview if I was interested. I’m not ashamed to say that I hammed it up in that interview – I didn’t mention Asim’s latest stint behind bars for fear of blackening my card, but I went into our forced relocation and the levelling of the old neighbourhood, and of Dad passing away before he got to see the towers finished; I even mentioned the drunk driver and Mom dying when I was nine, which is something I hadn’t talked about in a long time. I’m not sure what came over me, but in that moment I realised that I’d never wanted anything more than to work on top of that tower.

On an April morning six weeks later I found myself walking down West Street in polished shoes and a smart white shirt, and stepping into the lobby of the North Tower for the first time – my name was on a list, and the receptionist smiled at me like I couldn’t have belonged there more, pointing me towards the elevator that lifted me straight to the 107th floor. And there it was, that view to the rim of the world, the sun rising from the depths of space itself, its rays ricocheting off the South Tower. I stood there staring until my supervisor came over and barked at me to get in the kitchen for a briefing – there was a lot of barking in those early days, as no one really had a clue what was going on: none of the chefs had spent more than a few hours in the kitchen, and the menu remained largely untested.

Less than an hour later the doors opened and they began filing in: fresh faced boys in sharp suits and ties racing over to the windows to peer out over their new dominion, high fiving each other over the tables, waving actual wads of money around. This was their world, I reminded myself as I stood to attention, concentrating on maintaining an affable smile as I moved between tables taking orders, careful not to break into a run as I hurried to and from the kitchen. I remember thinking that there were an awful lot of cocktails being drunk given that it was 9am, and a mingled sense of empathy and relief when a waiter who wasn’t me dropped a tray of breakfast plates to a resounding chorus of high school cheers. But I don’t remember much else until the hordes had thinned down to a few solitary diners making deals over bottles of champagne, and my supervisor came over and touched me on the arm and told me to take a break. I went over to a quiet corner and stood looking down at the sprawling circuitry of the only city I’d ever known, all the interconnecting pathways of my history visible at once, and I knew then that I had found the one thing that could save me.

It’s hard to believe, but that was almost thirty years ago now. I’m approaching my sixtieth birthday, a new millennium is looming on the horizon, and I still can’t seem to move on from the restaurant. I long ago went from waiting tables to overseeing daily operations – long ago became that guy who goes around touching the arms of waiters and telling them to take a break. I still sleep alone in Dad’s old room, still look up at my workplace from his window first thing in the morning and last thing at night. Sometimes I catch myself in the mirror doing my affable work smile when I’m alone in the house. I guess it’s part of me now.

Not much changes in the city. Crime is down, the streets are cleaner, but the bankers still high five each other over tables, still get drunk on cocktails at breakfast, still wave actual wads of money around and occasionally laugh in the faces of my waiters. This is still their world, and as far as they’re concerned it always will be. But the more time I spend looking out at this shimmering city, the more I find reassurance in the fact that all of this will one day be gone. Yesterday in a flash storm I watched as a tide of rainwater ran down Schermerhorn Street swallowing up parking restrictions painted on the side of the road, and I thought: one day nature will reclaim the earth, and none of the signs or superstitions that we use to insulate ourselves against the big questions will protect us. The great calamities of humanity fall into cracks of forgetting between the generations, and so we go on living in imaginary bubbles of security, convinced we can build towers so tall that they’ll never need to come down. But of course everything will have to come down.

For all that, I seem to spend more and more time thinking about my childhood on Radio Row. Asim is gone now too, and in his absence I find myself endlessly replaying those summers: the water fights and fleeting schoolyard romances, the comic books and television shows and the magic tricks Dad used to goof up after dinner to make us laugh. Recently I’ve started dreaming that I’m standing on top of the tower, looking over the edge at a point where the ribbed metal disappears in an enormous drift of cotton cloud, and in the dream I know that if I leap into the void I’ll vanish in that cloud and reappear in the old neighbourhood, Mom and Dad and Asim waiting for me at the table as I run home to dinner through darkening streets, the dusk sky purple. I know how silly it sounds – the wandering mind of a lonely old man – but I always wake from those dreams feeling like everything is going to work out fine.