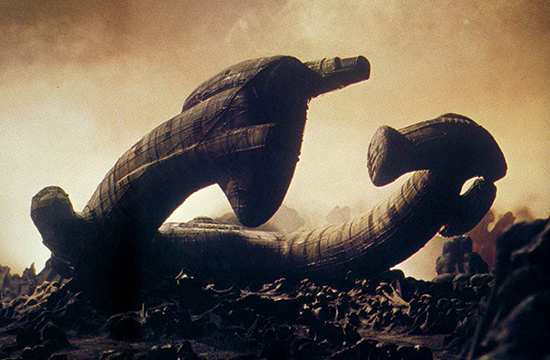 I’ve said this many times, and I always get the impression people think I’m making it up, but it’s true. When my brother and I were kids, maybe five or six, my dad would tell us one of two bedtime stories: The Exorcist, or Alien.

To be fair, this was because one night we’d asked him for the scariest story he’d ever heard, and rather than follow in western parenting tradition and start with the Brothers Grimm, he’d thought long and hard about the horror films he’d seen at the cinema, and given us a genuine answer. Iranians like my father are all pleasantries when it comes to social functions, but among family they speak the truth.

The versions we got were heavily simplified, though with hindsight this seems less an attempt to censor them than a reflection of the fact that he hadn’t understood the films. The Exorcist, he said, was about a monster who looks like a girl, whose head spins around, and who vomits green soup; Alien concerned an astronaut who is attacked by a spider, and the spider lays an egg in his face, and then a thing that looks like a chicken jumps out of his stomach and kills everyone. When forced to pick one, he said the The Exorcist was scarier – someone had fainted in the cinema, and afterwards there were priests outside waiting to convert people. Yet it was the story of Alien that captivated me, and I pressed him for details. How exactly did the spider lay an egg in this man’s face? Did the chicken monster talk? Mostly I wanted to hear about it jumping out of his chest; when pushed, my father described an explosion of blood that covered a room full of screaming people, and in that moment I was hooked.

At some point in the second half of the 1980s – I was eight or nine at the time – I saw a VHS rental of the sequel, Aliens, in one of two twirling display stands in our local corner shop. I began a campaign to persuade my mum to rent it, and she finally agreed on the condition that she watch it with me, and send me out of the room if anything unsuitable transpired. Twice I had to leave – during the cocooned colonist’s whispered pleas for death, and when Bishop was bisected by the queen – but the following year Aliens was screened on television, and I found myself watching it alone, gripping the sofa as the colonist’s eyes snapped open, my parents in bed and no one to protect me.

Soon after that, the dorkdom began. I managed to convert my closest friend at school, and the pair of us watched and rewatched the film – also the original Alien, which we loved despite its lack of military hardware. We would spend lessons sketching the creature in our exercise books, and pass weekends assembling plastic kits of the monster and the military vehicles. James was the technical one: he drew blueprints for the Sulaco and built a replica from Lego; for my part, I spiked a water mister with red food colouring and had my Action Man figures encounter the alien in mum’s flower bed, where they ended up with limbs missing and red dye crusted into their soft, clenched hands. I became so obsessed with Harry Dean Stanton’s character in the first film that I asked my family to start calling me Brett. They didn’t.

My fascination followed me to secondary school, where I introduced my new friends to a game inspired by the film. One was the alien, and would be given a few minutes to fold himself into the shadowy, pipe-covered corridors that lay behind the changing room, after which the others moved in a quiet sweep through the area, checking imaginary tracking devices and expressing unease in expletive riddled American accents. Finally the alien would drop from the ceiling or explode from a corner with a scream, something that never failed to shatter our hearts with shock; there would then be a comical chase through corridors and into the changing room, where we would collapse in hysterics. In the strange, almost post-coital calm that followed, we would sit eating sweets and debating what it would be like to be dismembered.

For us, Aliens was less a story than a feeling. It was a feeling that crept unbidden into our dreams, or for which we volunteered as we pushed open the changing room door with our fellow marines. It was a feeling of fear, but also of wonder; at the beauty of the creature, the purity of its aggression, the mystery of its origin and the secrets of the derelict ship. It’s a feeling that’s been absent from recent additions to the franchise, but thankfully I’ve had a long time to get over any preciousness: I was at peak fandom when Alien 3 came out, a film that served as a premature baptism for the disappointments of adulthood. At some point I boxed up my models, took down my posters, filed my comics and trading cards into folders. But every couple of years I rewatch Aliens, and the following night, or the night after that, I’ll dream that I’m a child again, hiding in a maze of tunnels, the adults dead and the aliens stalking me. That feeling is still there. It won't ever go away.

If I ever have kids, I know which story I’m going to tell them.
Posted by Cyrus Shahrad at 02:39