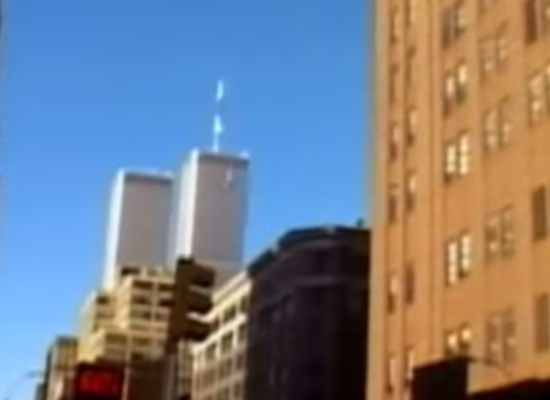 When I finally get around to putting all this down on paper, I will open with the impact: 30 seconds after 8.46am EST on 11th September 2001, an instant that I imagine frozen in time; a tower and a plane and a section of pale blue sky snipped from their surroundings and pinned to a slide for closer inspection. On the other side of the world, my friend Jim and I sun ourselves in Soho Square, tucking into a tray of triangular sandwiches that we’ve bought from Marks & Spencer on a whim. There follows an interlude of suspended disconnection, sirens swarming in a New York sky filling with smoke and shredded documents as I walk casually back to work, stopping to buy a roll of mints that will turn up in a jacket pocket weeks later, causing me to write in my diary on October 3rd:

I threw them away.

There’s the text message from Alex that I pause in the office doorway to read (Check the news. Speechless. Al). There’s the moment between the first and second towers falling when a plane banks dramatically over the British Museum and seems to point itself at my window, and I sprint down seven flights of stairs and out into the street, staring with incomprehension at the shrill blue sky as the plane swoops overhead and is swallowed by rooftops. There’s the point that evening when I realise I’m locked out of my building and am forced to walk from Peckham Rye to Brixton to sleep at the flat of a friend, who sits beside me watching looped newsreel footage of the attacks until I surprise myself by uttering a terrible thing out loud.

“I wish I’d been there to see it,” I say. My companion responds with a look that will become all too familiar over the coming years.

There’s an alternative opening that springs to mind. It’s two weeks later, and I’m sitting in a lecture theatre in the journalism building at Cardiff University. A man called Mike Ungersma is standing at the front of the hall and warning ranks of new students not to be fooled by the pyrotechnics of the event that they all believe will determine the course of the new century. Every generation has its event, he says – the Berlin Wall, the Kennedy assassination, Pearl Harbour – and while all seem momentarily to redefine the parameters of plausibility, all are ultimately proved to be rocks in the river of history – causing more ripples than most, but doing nothing to slow the current of passing time.

I take notes like the rest of the students, but like the rest of the students I struggle to believe what he says. In the cafeteria we group around tables littered with styrene cups and flapjack wrappers and pore over papers still bearing front page images of the attacks, a television in one corner relaying newly discovered footage of the planes going in, the towers coming down. Conversation warily circles the upcoming war in the Middle East; the students seem already to be mentally measuring themselves up for helmets and flak jackets, testing their faces-to-camera. All appear to view the ragged and still smoking hole in the New York skyline as some sort of portal to a dramatic future in which they call the shots.

Except me: I can’t stop thinking about the past. Like the shockwave that travelled down and then back up the towers following the impact of the planes, the import of what I witnessed that day is only now starting to make sense. In Cardiff I begin to understand that what I had seen unfold on screens in the Time Out television department, dozens of co-workers huddled in tearful groups, occasionally running out with hands clamped over their mouths, marked an end of innocence. I hadn’t known it at the time, and so I had stared transfixed as the cameras panned in on falling bodies and the slow motion pancaking of the towers; I had scoured transcripts of frantic phone calls, read everything I could on the passage of the flights, the mechanics of the collapse. I’d gone as far as rewatching films that I knew featured the towers in a cameo role: light-hearted romps for the most part, Tom Hanks and Daryl Hannah dining at Windows On The World in Splash, Dan Aykroyd and Eddie Murphy taking the stock market by storm in Trading Places. I had found myself awestruck by the air of impenetrability they exuded, barely a window visible amid the gleaming steel. I would pause the movie, picture where the planes went in, wondering which parts had been recognisable among the rubble. Like staring at the sun, unaware of blindness setting in.

One evening in late October, I find myself rushing upstairs during a documentary on 9/11 that I’ve been watching with housemates in Cardiff, lock myself in my room and sit shaking with sobs that I stifle with a hand against my mouth. Soon after that the dreams start, every one of them the same: me staggering around the streets of midtown New York in prismatic dawn light, siding up to cops and commuters and begging them to take heed of the tragedy about to unfold in the skies. No one listening – being brushed aside like a bum or a madman over and over, until finally I look up and see a plane cleaving towards the first tower, and know that it is too late.

Again the impact. Thirty seconds after 8.46am on 11th September 2001; American Airlines Flight 11, floors 93-99 of the North Tower. Or rather, not quite. It’s not the moment of collision that I keep returning to so much as the one immediately before it. In the way that traumatic events leave survivors obsessively reliving last moments – scrutinising mundane details for signs of the monster waiting in the wings – so I find myself compulsively searching for images and descriptions of this one: the plane so close to the tower that no sky separates the two, the silver face of the building as yet intact, the people inside still going about their business, hands full of phones and papers and first cups of coffee.

There’s the one clip, of course. French filmmakers trailing a fire crew. The fireman standing in anticipation of a shot, looking a little bored. Raising his head at the roar of an engine, one hand instinctively rising to hold a helmet in place. The camera following his gaze, swinging left in time to catch the towers framed by buildings. The plane bearing closer.

This is where I pause the video. At first I thought it was an attempt to prolong the inevitable, to relive that age of innocence before the impact changed everything. Now I’m not so sure. I remember reading Extremely Loud And Incredibly Close, one of countless books I’ve picked up due to an association with 9/11, and being overwhelmed by the ending, in which Safran Foer plays the event backwards in slow motion – the reverse blossoming of flames as the explosion contracts inwards, fuel running up lift shafts and stairwells and back into the plane as it slides in retreat from the building, papers returning to their piles, phones and fax machines and human forms reassembling and righting themselves. Glass and steel cascading upwards and forming a perfect mosaic to fill the hole as the nose retracts, the surface of the tower intact again, the plane once more outside the building.

For a while it made me wonder if there wasn’t something magical realist in my own fascination with the moment of impact, as though in pausing and stop-motioning I was seeking proof of moments between moments, exponentially sub-dividable until time does indeed start running backwards. But the more years that pass, the more I think it’s a fascination with the symbol itself – its sickening beauty, the perfection of its dread mythology. A tower and a plane and a section of pale blue sky; a vision of Babylon, thousands dying unseen inside twin tombstones, flaming angels leaping into the abyss. And somewhere in between these ages of innocence and experience, frozen in a single pixelated frame, an eternally suspended silence into which I cast questions like stones, and receive no answers.
Posted by Cyrus Shahrad at 00:11